Prior to the formation of PRUI, Rugby had been played in Indonesia as a social sport for more than 40 years (mainly by expatriates) and historic records show that Dutch and British nationals also played rugby during the early part of the 20th century.

PRUI is known as an organisation that is responsible for the management and development of Rugby Union in Indonesia. PRUI is legally registered as a sporting association in accordance with the Law governing the Republic of Indonesia.

On a local scene PRUI was recognised by Komite Olahraga Nasional Indonesia (KONI) as being the national sporting organisation responsible for the development and management of Rugby in Indonesia in August 2013, under the Presidency of Air Marshall (ret.) Pieter Wattimena. PRUI become a member of Komite Olympiade Indonesia (KOI) in February 2015.

With the number of new clubs and provincial unions tripling over the past year along with the exponential number of players, PRUI participated for the first time in the National Games (PON) exhibition in 2016. As a result of it, Rugby 7s will be officially played at PON 2020.

Under new PRUI President Didik Mukrianto SH, MH, PRUI also participated in SEA Games Kuala Lumpur in 2017 & successfully hosted Rugby 7s as an official sport at the 2018 Asian Games in Jakarta & Palembang. With regular coaching clinics for coaches, MOs and other supporting resources, PRUI looks forward to a continued increase in players, games and tournaments in the future. 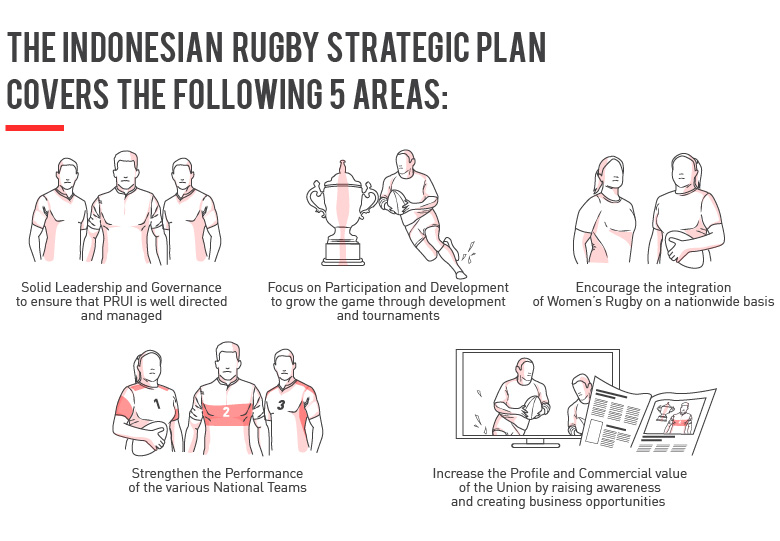 Chief of the Council of Commissioners: Dr. Djoko Udjianto

Members of the Council of Commissioners: